Her review below (link here):

“The title track, Set Free, sums up the theme of this album with its poignant sadness tinged with a sense of beauty, and yet full of hope for the future and belief in gold at the end of a rainbow. The track is essentially a break-up song but without any dark bitterness.

The album is a real grower that gives more every time you hear it with each song based on a strong and memorable tune.

Inside Me is a gentle song, more singer/songwriter style than the raging rock god that we find in Faith.

All Brendan Haze’s songs are a mix of exciting, on the edge of danger rock guitar mixed with softer storytelling, They are musical poems of hope and new beginnings through adversity or sorrow.

Snow Globe has some pretty, stripped-down guitar that suddenly bursts its banks into a river of ragged rock and orchestral crescendo.

Shining Like The Sun has a Spanish flavour, it is a sunny, radiant song of a summer love that actually does last for ever.

Kings and Queens, reflects its title as it begins with courtly ceremony in a dark melody based on heavy chord piano. The regal purple pomp then gives way to the magical guitar flow of the chorus.

Brendan produces meticulously crafted melodies, he is a songwriter with a voice that woos the senses.

Push Away brings on some crashing blues guitar and One Year From Now treads a simple melodic line, before it too combusts into rock anthem mode.

What Will Be brings a strong finish to a rock album with heart. – 9/10 Flicky Harrison”

“I first met the man who records under the name Haze (Brendan to his friends) many years ago when he was the part of The Unforeseen, a band very much from the classic rock mould and where he showed that he was equally at home firing off high octane rock riffs as he was following delicate acoustic lines. And it is those twin abilities that very much inform this new album. Set Free is a collection of twelve songs that manage to blend subtlety with drive, power with restraint, soaring electric playing with gently picked acoustics. Although the full on rock and roll power plays largely take a back seat to cleverer arrangements, this is no folksy troubadour, the songs are fleshed out with the usual range of contemporary band sounds and when the foot needs to go on the pedal, Haze is just the man for the job.

But for the most part the play off between the accessibility of pop melody and the dynamic of the rock tradition creates a wonderful middle ground and often has me thinking of bands such as The Goo Goo Dolls and in fact there is many a song here that could easily be the play out sound track to the latest Hollywood Rom-Drama.

If there is one criticism it is that the sentimentality that runs through the songs is a bit obvious, but you have to sing from the heart and if that is what naturally flows then who am I to cast the first stone and even if I am correct once you get past titles such as Shining Like The Sun and Blanket of Love (come on Bren!) the exquisite Spanish classical meets rock balladeer guitar work is more than enough to save the day.

Essentially, it’s not an album that will bring about the next revolution, but then how many are and if you are just after a collection of well crafted, mid-tempo acoustic driven songs, you could certainly do a lot worse than pick up this album.” 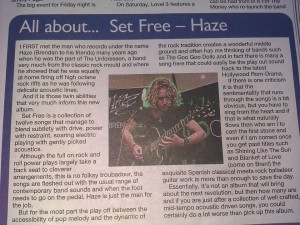 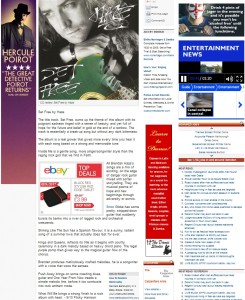 Click the image below for details on how to Buy The Album!
It is available on CD for £6.50 and comes with a free Bren Haze Guitar Pick!
Alternatively you can download the digital album from one of the stores below (prices vary).