Thanks to all who supported me at the gig and from afar and for all your good luck wishes.

I thought I played well given my time off the radar and did my very best. It was soooo good to hear people cheering and clapping a solo again!
This took me by surprise but in a very good way. Yipee!!

Great crowd at The Jailhouse and I appreciated the warm welcome. I plan on returning soon

Photo below courtesy and Copywrite of KirstyPie @ Slice 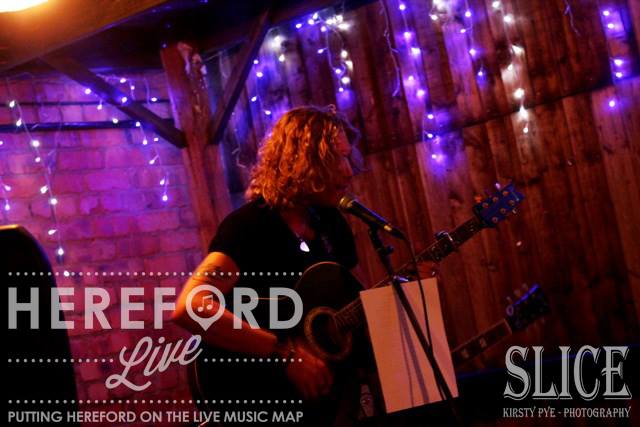 10 people were picked to perform at the outside Acoustic event kicking off Hereford’s Live music event at The Jailhouse in Hereford.
Bren was asked to kick off the Live Sessions on the Outside Stage at 7:30pm Wednesday 25th September. Bren will be playing a special set with some new songs and couple of favourites using a new twin guitar set up / Acoustic with Electric Solos etc.

Details of the event here:
https://www.facebook.com/brenhazemusic

Weil Lieben & Shining Like The Sun have now both been played on BBC Introducing show!

Andrew Marston at the BBC when talking about Bren said “Bren Haze is an acoustic rock guitarist now based in Hereford back from Austria!”
Bren plays “A mixture of acoustic songs with Slash Pink Floyd-esque solos.” “Wonderful”

Thank you again Andrew and thank you Hereford for inviting me to kick off this great event on the 25th.

The wheels are still turning and I have been diligently rehearsing a solo set which features new tracks such as: Snow Globe, Push You Away, Inside Me and favourites such as Set Free, Shining Like The Sun, Step Out Of The Haze, And You Know etc.

thanks Jake! Anyway, as I was in that part of the country I decided to stop in at Puttyfoot’s Studio and say hi to my long term dear friends Darren and Lisa.
We had a great catch up and I was very lucky to have a few photos taken by Lisa Coleman in the famous Red Chair.
It was nice to relax, chat, swap news. Below is one of the amazing photo’s Lisa took (click to expand).

Back in the UK and ‘Shining Like The Sun’ was played on Andrew Marston’s show “introducing – Unsigned, undiscovered and under-the-radar music” on  BBC Hereford & Worcester. Coool

Thank you Andrew! That made my weekend

You can listen to the track as it was aired by also clicking here if the above play button does not work for you.

Well as I’m in England for a while I ended up chatting to long term friend & Producer Nick Beere (Justin Hawkins of The Darkness) about ideas and studio time for some ideas I’ve been mulling over for a while now.

It started off with contemplating dates about laying down 2 specific special tracks and possibly a couple of ideas that I had for various artists/friends for a long time but never actually pursued.

It will be a mix of Acoustic, dirty and light rock tracks, an instrumental with a Massive Attack Teardrop type vocal line, I am also now co-writing a duet song I had as an idea giving a women/man’s perspective type song.
As well as a couple of nice male & female duet/harmony style tracks I’ve been writing.  I have also now dug up 1 or 2 classics that I only had old rough live recordings for of which I will now record with some very special people!

I will reveal the tracks and details as they take shape and the truly talented artists, musicians and inspiring people that I will lucky enough to be working, co-writing, playing and singing with!
AND YES! as requested many times, hehe

Set Free (below) will be finally recorded properly and on the new album!!

So with fire in my heart and the one and only lady by my side! (my dog Nushka! hehe) I now have full on album project to plan, write, record, release and see what that may bring to the live arena

I will keep you all posted on any news and if course some cheeky snippets on my Facebook page!.

Thank you for stopping by.
Bren

Well after a long long time away I now have a website!!
Take a look around and let me know what you think

The site will be slowly updated with some old songs, videos, and photos.